For the entire month of March, we will be doing $21 microchipping! We will implant the microchip AND register it for you! ($69 value!)

In addition to discounted microchipping all month long, we will also be hosting a FREE* microchipping day! Location of this event to be announced shortly, so keep checking our Facebook page!

*The microchipping is free so long as the owner registers it themselves. If you’d rather we register it for you, there will be a $21 registration fee. 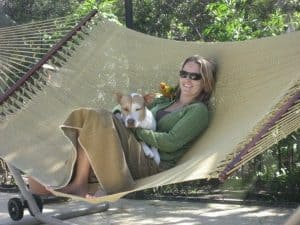 We loved Bailey like she was our child. She was an amazing dog and needed almost no training at all. Bailey was one of those dogs that comes along once or twice in a lifetime and this is a story of how, one rainy day, we almost lost her!

Bailey was awesome but she wasn’t perfect and she had her challenges, like any dog. For our Bailey, it was thunderstorms or fireworks. Poor Bailey would lose her mind at any of those loud sounds and try to escape any room that she was in. Even when we were home, she would shake like a leaf, drool, pant, and run from room to room to find shelter. For her, sedatives were the only thing that helped.

One rainy day, while we were out and about running errands, we got a call from one of our friendly neighbors that she saw Bailey get out and one of our other neighbors picked her up. We knew her escape was most likely thunderstorm related (and later found out that she had ripped a whole in the window screen and dug her way out of the yard once outsides). We immediately rushed home and, while it was still raining, went to the house of the neighbor that took her in but nobody answerer.

So we continued to walked around the neighborhood calling her name over and over, hoping she would hear us and make her way back home. Then, finally, we saw her! But she wasn’t wearing her collar and tags that she normally was wore… she was wearing a brand new collar and a bandana that we definitely had not put on her. Bailey immediately saw us and began pulling frantically on the leash to come towards us. We yelled out, “Hey that’s our dog!” but the people were reluctant to let her go saying, “No, they said she is ours.”. With that, we responded “No, she’s not! The Humane Society called us after scanning her microchip and let us know that she was picked up… that is our dog!”. Meanwhile, our Bailey was pulling like crazy trying to get to us. After a few minutes, the people walking her gave up, scolded us and saying that we didn’t take good care of her, before finally handing us over our beloved dog.

We were so happy and it all started…and ended… with that one little microchip we had implanted 2 years earlier and registered for about $35. Without that chip, there’s a chance that we never would have been our Bailey again!

Thank goodness for that little microchip! 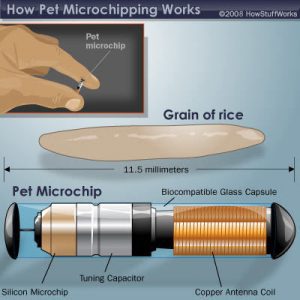 Microchipping your pet is one of the most important things you can do for your furry loved ones. By implanting a simple microchip, your pet can be located much easier than if they weren’t. Unlike a collar or harness, microchips cannot be lost or fall off. A quick scan of a microchip reader (available at any veterinary office and most shelters) can show if the scanned pet has a microchip.

Once we obtain the number from the chip, we can enter the unique number sequence into a Universal Pet Microchip Lookup which tells us which company registered the chip, name of the owner, and their phone number! Some companies even automatically alert an owner via email or text message if their pet’s number has been looked up.

Every single pet (dog OR cat!) is eligable for a microchip and it is recommended that every single one of them get one. Even if your cat never goes outside, they should have a microchip because the one time they sneak out while you’re opening the door or forget that the window wasn’t closed, may be the last time you see them.

Providing your pet with a microchip is super quick and easy to do! This appointment could be done with a veterinary technician and only takes a few minutes. If you are interested in microchipping your pet or are curious to see if they already have one, give us a call!