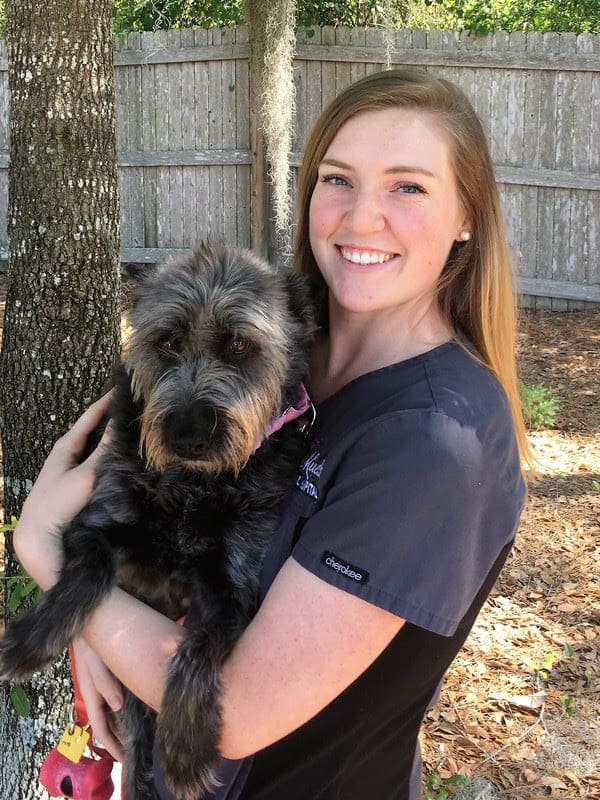 I knew she was meant to be my dog the minute I saw her. Toto, a 6 year old Cairn Terrier mix, sat staring at me as I walked past the kennels and kennels of dogs at S.A.F.E. She was sitting down at the back of the kennel she shared with another dog who was running around barking. Never once did she bark, she just stared. I immediately asked if I could take her out so I could meet her face to face. She was shaggy and in desperate need of a groom but freshly bathed and had the sweetest, most kind eyes I’ve ever seen. As soon as I took her outside to walk around, I knew she was perfect. The only downside to this perfect dog? She was heartworm positive.

Working at a vet clinic, I knew that being heartworm positive isn’t good but it can be treated and fixed. After I signed the papers and she was officially mine, I knew she had to come to work so we could get her checked out. Toto, now named Stella, has been the best addition to my small family and everybody who meets her falls in love. Once she came to work, we did another heartworm test to confirm that it wasn’t a false positive, but sadly it was not. The vet performed a thorough exam, took x-rays, and treatment began.

Treatment was rough. Over the next few months, poor Stella had to be kept in a kennel when we weren’t home and was only allowed on short walks. She wasn’t allowed to play hard and was on a lot of medications. Thankfully, she’s always had a very calm disposition so it wasn’t very hard to keep her calm, but she definitely wanted to let loose sometimes. After every treatment, she was exhaused and sore, only wanting to sleep all day. Slowly but surely, she started to improve.

When it was time for her first heartworm test after treatment was over, I was so nervous! What if it didn’t work? What if she had to go through treatment all over again? She was such a trooper for her test and we all waited patiently for it to be done. Then, it was. She was negative! I was so relieved! My poor little Stella was such a good patient and now she was all better and finally allowed to be a regular dog!

Stella has been perfect ever since. She takes her heartworm (and flea!) prevention every month and has had two negative heartworm tests since treatment ended. Knowing what I do about heartworms and how fatal it can be if left untreated (or never prevented to begin with), I will always make sure my pets are on heartworm prevention!

ProHeart 6 is a heartworm prevention that lasts for 6 months! Do you sometimes forget to give your dog prevention every 30 days? If so, this is the prevention for you!