September 2019: Rabies Can Be Stopped!

World Rabies Day is an international awareness campaign coordinated by the Global Alliance for Rabies Control, a non-profit organization with headquarters in the United States. World Rabies Day started in 2007 to raise awareness about the impact of rabies on humans and animals, provide information and advice on how to prevent the disease in at-risk communities, and support advocacy for increased efforts in rabies control.

Did you know that in the United States in 2016 there were over 4,900 reported cases of Rabies in mammals and one or two people still die from the disease every year? Rabies is spread to humans and mammals primarily through a bite from an infected animal. Cats have become the most reported domestiaced animal to contract the disease as they are commonly the least vaccinated. 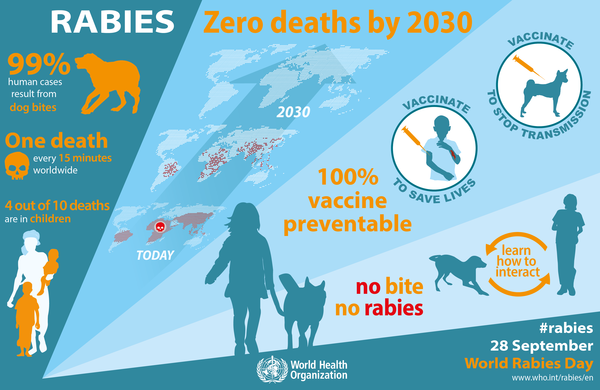 Major health organizations including World Health Organization (WHO), World Organization for Animal Health (OIE), and the Food and Agriculture Organization of the United Nations (FAO) have pledged to eliminate human deaths from dog-transmitted rabies by 2030. A staggering 99% of human rabies cases are contraced via a bite from dog or cat. The only way to eliminate rabies is through vaccination. Our doctors recommend that you vaccinate your pets against rabies and be diligent about keeping them away from wildlife that can spread the disease. Florida law states that all dogs, cats, and ferrets 4 months of age or older must be vaccinated by a licensed veterinarian against rabies. Please give us a call today to schedule your preventative care visit with one of our wonderful doctors!

Is your dog in pain?

Some signs of discomfort in animals are:

If you think your pet may be in pain give us a call at 904-940-9401 to schedule a nose to tail physical exam with one of our doctors to determine what the best treatment is for your furry loved one.

Read below the extra steps and care our groomer takes for painful pets!

When it comes to grooming pets with arthritis, sore joints and other pain issues, your pets comfort always comes first. Most pets who experience joint pain are seniors, however even younger dogs who have had past injuries or genetic issues like hip dysplasia, can also have pain management issues. Allowing your pet to rest and lay down during the groom whenever possible is best. Not every bit of grooming requires a pet to stand. Usually with these pets, it’s suggested to do a one length all over rather than a breed trim. Breed pattern trims require a dog to stand longer to be sure the lines for the pattern are even on both sides. Doing one length all over, is putting humanity before vanity. Also keeping the nails trimmed and short can help alleviate joint and muscle pain. Long nails spread the toes out, causing a change in your dog’s gait. This can lead to joint problems and pain. Kind of like wearing two different shoes with varied sole thickness. It’s best to bring your older pups in for a morning appointment to get them in and out as quickly and safely as possible. So they can get back home to enjoying the laid back dog life.