A rabies vaccine is the only vaccine required by law.

If your pet has not been vaccinated with the rabies vaccine and they bite someone they will be immediately quarantined for a minimum of 10 days (at your expense). If that person dies or is seriously injured your pet may be deemed dangerous and euthanized.

In the event of a natural disaster or any event that causes you to evacuate your home you will not be able to take your pet to a shelter/hotel without them being properly vaccinated. Some shelters/hotels also require other core vaccines or proof of being on prevention. It is your responsibility as a pet owner to know what will be required. 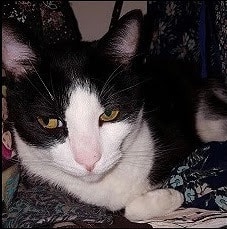 We are a busy family of 4 plus 2 cats and 2 dogs. With one in high school and one on the way (at that time) there was an endless list of appointments and obligations. Things being pretty hectic around the time of the year for Neville’s annual checkup, it got lost in the shuffle. On top of that, the year before, Neville had been having bladder infection issues. He had been to the vet so many times. Both my husband and I assumed he had received his vaccinations at some point during that debacle. As it turns out, because they don’t vaccinate unless a pet is healthy, he hadn’t. And this is the story of how he went to kitty jail.

Neville was an indoor cat, mostly. He did go out on occasion to explore the back yard. One day he sauntered up to my dad on the back porch and started the usual routine, rubbing against his legs and purring. Dad responded with the anticipated foot rub. Neville was purring and rolling over on to his back, when all of the sudden he jumped up, clawed and bit my dad’s foot. This was very out of character. Over the next twenty-four hours, Dad’s foot began to swell and turn red. He went to urgent care and found out he had cat scratch fever…it’s an actual thing, not just a Ted Nugent song. Who knew?

At the urgent care clinic, they told my dad that they would have to report the bite to Animal Control. I guess this is standard procedure. They also asked if Neville had his rabies vaccination. “Of course he has” I thought to myself. If we could verify that he was vaccinated, there wouldn’t be any action taken. I frantically went through all of my vet records and could not find the paper work. I thought for sure it was just because of my “throw everything in a pile to sort out later” filing system. I called the vet’s office to have them print the record for me. Turns out, not only had we missed the most recent vaccination, but because we only took Neville in for illness visits they had no record of vaccinating Neville…ever.

How could this have happened? If I am being honest, pretty easily. I am very disciplined about making sure the dogs are up to date on their vaccinations. Somehow it feels more imperative than the cat’s vaccinations. I hear about incidents with dogs much more often than cats. In fact, I cannot remember ever hearing about a cat attack. So, I guess I just didn’t realize that it had been so long since Neville’s last rabies vaccine. Chances were low that he was carrying rabies, but we were still on edge at the idea that my dad could be infected.

Animal control took him away for 10 days for observation. I had to pay them ten dollars a day to house, care for and observe him for signs of rabies. This was about the same amount of time it took for my dad to heal from cat scratch fever. He missed almost 2 weeks of work and barely avoided a trip the hospital for IV antibiotics. The folks at the St Johns County Pet Center were very friendly and kind. They didn’t get annoyed at my daily phone calls to check in on Neville. Ultimately, Neville was able to come home after his 10 day stay in kitty jail. We had to get him vaccinated at the facility or by a vet of our choice within 5 days.

After his release, we took him straight to MuraBella Animal Hospital and signed him up for the annual VIP program. We will not be making this mistake again. Get your pets vaccinated for rabies, ALL OF THEM!

Dr Bell highly recommends vaccinating your pets for your safety and the safety of others.

Check out this link for valuable info on the global rabies alliance and their efforts to eradicate human exposure: rabiesalliance.org