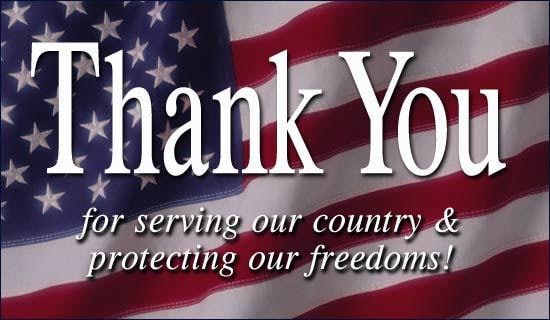 During the month of November our “Local Hero’s” are eligible for FREE VIP Plan registration!

We will be at the St Augustine Half Marathon on Sunday, November 11th manning a water station to help keep the runners hydrated and motivated! Say “HI!” when you run by or come visit while you support your local runner.

Karen’s Story: Both of my parents served in the U.S. Air Force. My dad was career military, enlisting as an officer when he turned 18 and retired with 33 years under his belt as a Colonel. My mom served for a total of 14 years between active duty and the Reserves, meeting my dad while they were both stationed in California, before retiring when my brother and I were young so she could stay home with us. My dad traveled a lot, deployed a couple of times around 9/11, and moved us all over the world. He wanted to provide us a better life that he had, to give us more opportunities, and to help us turn into responsible, respectable people. Being in the military, my dad was able to get an amazing education, serve his country, and provide that better life that he always wanted for us and himself. With that, he was able to utilize the G.I. Bill for my brother and me to attend college. Although he is now retired, my dad continues to work full-time, using the skills and education he received in the Air Force to now be the Director of DLA Disposition Services in Michigan. My brother had always wanted to follow in our dad’s footsteps and join the military, and as fate should have it, he was able to enlist in the Air Force the day that our dad’s retirement paperwork was finalized. Now, he serves in Pensacola and hopes to provide his family the same life that our parents provided us and to serve his country.

Lisa’s Story: My husband Jeremy enlisted into the US Army straight out of high school. Although he did not make a life long career out of it he was able to use the resources available to him to start his life as an adult on his own. He was able to support himself financially and later use his GI bill to go to college. He was stationed in Hawaii and that is where we met and were married. We were very lucky that he did not have to deploy under any stressful situations and he was fortunate to be able to travel around the world and experience different cultures. His most memorable locations were Australia and Japan. He has made some life long friendships and ironically some of those friends are from right here in Florida!

Did you know 2 in 10 pets will have abnormal blood work values? Our VIP plans provide best medicine to every pet in an affordable way and includes annual preventative blood work. Just like us, annual blood work can highlight potential issues before they become life threatening. Recommended yearly vaccines are included as well as preventative bloodwork and a full 12 months of heartworm and flea and tick prevention. This month we have made them even more affordable by waiving the one-time registration fee for our veterans and first responders ($50 value). Interested in learning more about our VIP Plans? Click the link below to see a break down of our plans and what is included in them.

We will be closing early on Wednesday, November 21st @12pm and will remain closed for Thanksgiving Day. We will reopen on Friday, November 23rd @8am.

Join us for FREE Popcorn Fridays! In addition to our refreshment station we are going to be popping popcorn on fridays and sharing it with our wonderful clients! We know how stressful it can be when your pet isn’t feeling well and how long it can take while we are running diagnostics so anything we can do to help make you more comfortable while you are here we will do!